One of the nicest signs-of-spring here in Tromsø in Northern Norway is when the large flocks of Snow Buntings (Plectrophenax nivalis) arrive. To me, they always make me think of some kind of large black-and-white butterflies when they fly around, and their beautiful and rather mournful song stir up many memories from when I lived on Svalbard up in the north. In short, it`s one of my favourite birds. 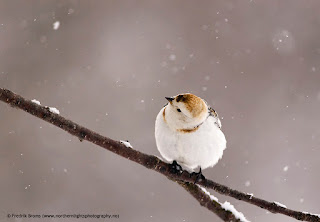 After having spent the winter in Russia and adjacent areas, the Snow Buntings migrate north-east in the spring and stop here in Northern Norway before they continue on their long journey to the breeding areas in Eastern Greenland. The coasts of Northern Norway is the last chance for them to refill their body-reserves before undertaking the long flight across the Atlantic, and many of them double their weight before they continue their journey.

Snow Buntings coming in for landing on a grassland patch

The first Snow Buntings usually arrive here in the end of March, but the large flocks arrive somewhat later in April and mix with the local breeding birds. In some years, they pass by the area almost unnoticed, mostly high up in the mountains, but in years with heavy snow-fall in the spring (like this year), they may be seen foraging in large flocks along the coasts and mud-flats and even in the middle of Tromsø city center.

Early in spring, the flocks are dominated by males. The females usually arrive a bit later.

This year, the snow is still falling even though it`s soon mid-May. Other birds, with similar migration patterns and breeding habitats, have also turned up in the large flocks now, and during the last couple of days Lapland Buntings (Calcarius lapponicus) have arrived within the Snow Bunting flocks. During a weekend trip, I spent some time with the birds with my camera in the rather chilly summer weather of Troms. 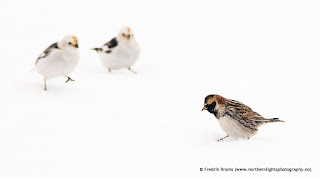 Two Snow Buntings together with a Lapland Bunting 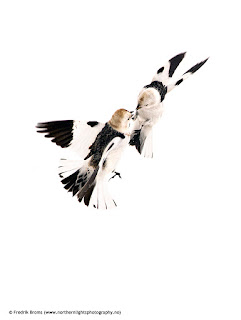 Two males fighting on top of the snow. The background has been burned out. 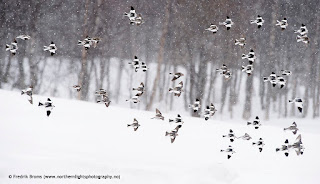 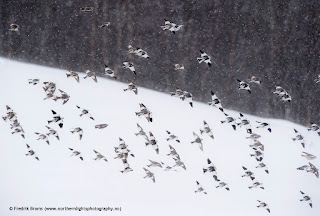 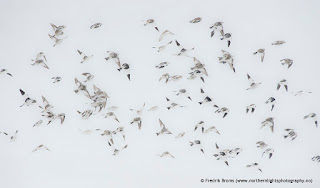 The arrival of the Snow Buntings attracts various birds of prey that don`t say no to a well-fed bird. While photographing a flock in the snowfall this Sunday, one of the most formidable hunter of small birds, the Sparrow Hawk (Accipiter nisus), suddenly appeared in the middle of the flock and grabbed a snow bunting for lunch. 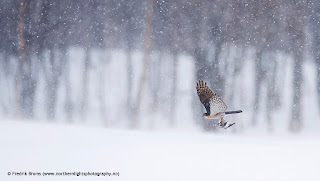 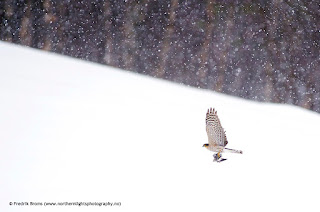 With relatively strong winds from the East, it is probably just a matter of days before the majority of them leave now, but soon another nice spring-migrant, the Red Knot (Calidris canutus), is here again, replacing the black and white flocks with flocks of red...
Upplagd av Fredrik Broms kl. 04:17