Tonight the sky was filled by some of the most spectacular northern lights that I have ever seen. Early in the evening some truely amazing blood-red auroras could be seen towards the southern horizon as a strong CME (Coronal Mass Ejection) hit the Earth`s atmosphere and sparked a geomagnetic storm over the polar areas and also extended the aurora-oval far south so that many areas where auroras are normally not seen got to see the show, including "exotic" areas like e.g. Arkansas and California!

Time after time the sky was filled by the most amazing patterns, including strong coronas in green and purple, but most noticable was the dominance of the very deep all-red auroras - a much deeper red then I have ever seen before! 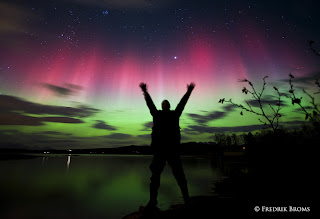 The colour of the northern lights depend largely on the composition of gases in the Earth`s atmosphere. When charged particles from the solar wind hit the atoms and molecules in the atmosphere, they excite the atoms present and give off light that we see as auroras. Tonights deep-red auroras indicate that the particles from the solar wind interacted with oxygen at high altitudes (whereas the more "normal" greenish-yellow auroras are formed at lower altitudes). Neutral nitrogen is responsible for the purple colour often seen at the "edges" of the more common oxygen-green.

More about red auroras can be read here: http://www2.gi.alaska.edu/ScienceForum/ASF9/918.html 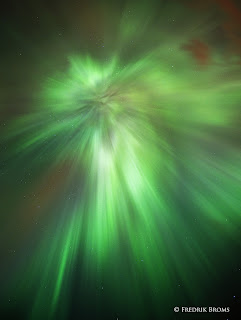 Northern Lights Corona in green, yellow and purple (the orange parts are clouds) 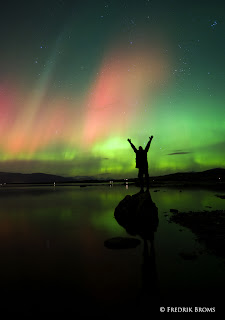 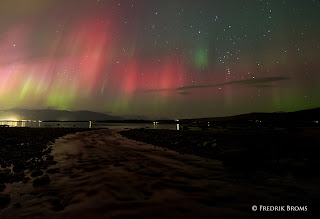 Deep red auroras as seen from a river around midnight. Orion can be seen to the right.
The lights from the nearby city Tromsø can be glimpsed to the left in the picture 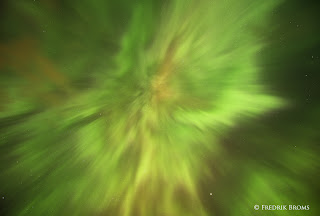 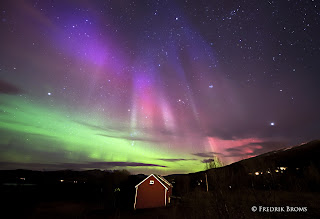 Later in the night, the auroras appeared so strong in colour that I had to
decrease the saturation level in post-processing considerably! 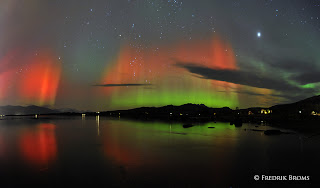 Panorama by the sea. Large patches of an almost unreal red colour dominated the auroras tonight.
The planet Jupiter can be seen shining through the thin clouds to the upper right.
Upplagd av Fredrik Broms kl. 20:09 12 kommentarer:

Bird-photography from the living-room

It is late October and most birds have left their breeding grounds up here in the north. With the last month being dominated by heavy rainfall and wind, I can see their point in choosing to spend the winter further south, even if I myself can`t stand warm temperatures and very much welcome the winter.

Some birds stay during the whole winter, and more and more birds are gathering around the small feeding-place that we have in our garden, to feed on sunflower-seeds. Some days, a handful of seeds is all that is needed to do some nice bird-photography in the rain.

When I was out refilling seeds the other day I managed to scare off one of my absolute favourite birds (but a bird that I have never seen around here before) - a Great Grey Shrike / Varsler (Lanius excubitor). I failed to find it again, but instead another bird of prey visited the feeding-place just a few minutes later - a Sparrowhawk / Spurvehauk (Accipiter nisus). 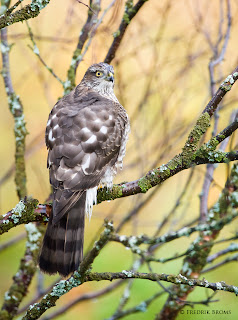 Soon after having scared the smaller birds away, a Jay came flying and landed higher up in the same tree and very clearly showed that it did not like the new visitor at all. When irritated, jays often announce a bird of prey with a harsh screech and raise a crest of feathers on their head which made for a funny picture of this colourful bird. 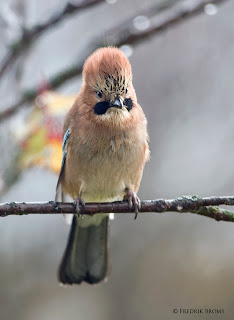 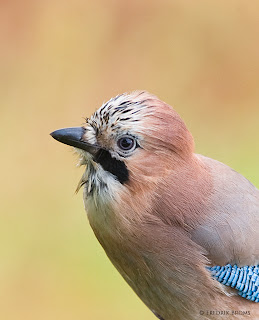 
The sparrow hawk became immidiately aware of the new-comer, and kept it under close watch, and after taking off, the hawk suddenly re-appeared several times and it looked like it was not just irritated but actually considering the jay as prey despite the large size. Normally sparrow hawks go for smaller prey but this bird looked to me as if it was a female (being considerably larger than the male), and came back several times in surprise-attacks even though the smaller birds were gone and it did not look like the jay had full control over the situation. 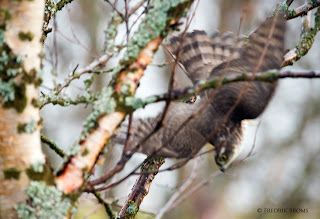 An attack by a Sparrow Hawk goes quickly and usually happens among the branches of a tree. 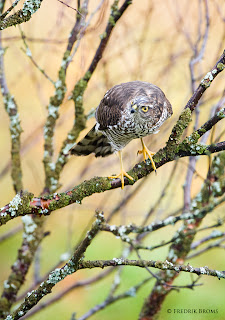 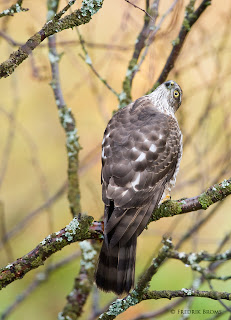 The Sparrow Hawk kept the Jay under close inspection

Happy with the photo-session from the livingroom, another surprise-visit came by in the afternoon - a Three-toed Woodpecker /Tretåspett (Picoides tridactylus) - a beautiful woodpecker of the northern taiga. 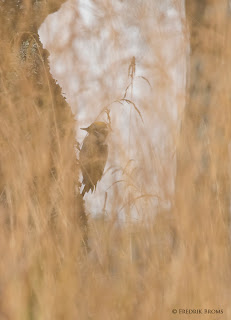 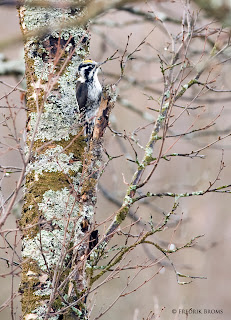 During Saturday night the meteor shower "The Draconids" had its peak in activity. With rather heavy clouds and some light snow-fall early in the evening, I had no real hope to catch any meteors with my camera. Soon after setting up the camera however, I saw a very bright fireball in the east (not far from Jupiter), leaving a distinct reddish smoke-trail. The camera was, of course, pointing in another direction but it looked promising and I decided to ignore the clouds building up behind me.

Meteors are caused by small bits of debris that, when crashing into the Earth`s atmosphere, burn and cause the intense light-streaks that we call meteors. The origin of most meteor showers are dust from comets. When comets travel to the inner parts of the solar system, they shed a stream of debris along their orbits. When the Earth travels through such a stream, an increase in meteor activity known as a meteor shower can be seen. The comet debris that causes the Draconids comes from the comet 21P/Giacobini-Zinner.

The clouds came closer and during the peak of the activity I had to realise that the score Clouds vs. Draconids was 1-0, but despite the cloud-cover, I caught a farily bright meteor close to the constellation Cassiopeia. 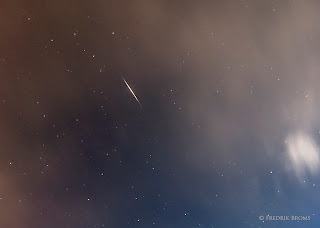 Draconid meteor through the clouds


Later on, the sky got more clear but there were few meteors to be seen, but instead some spectacular northern lights filled the sky and were at times really bright despite an almost full Moon. 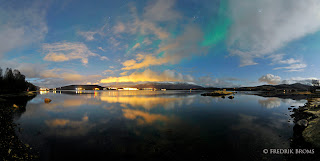 Auroras over Tromsø. The Planet Jupiter can be seen through the clouds to the upper right in the picture.


The next meteor shower is "The Orionids" on the night of October 21, and for an excellent overview of the meteor showers in 2011, have a look at this page: http://www.theskyscrapers.org/meteors/
Upplagd av Fredrik Broms kl. 01:30 Inga kommentarer: