After the first time I saw a Great Grey Owl (Strix nebulosa) in Northern Sweden many years ago, I have always wanted to spend more time with this majestetic big owl of the Northern Forests. This spring, there has been many reports of the great grey from many places over Scandinavia, and finally, I was able to stand eye to eye with the king of the forest again.


I spent too little time in the forests to be able to tell a story about the owls, but most of the daytime was spent resting, and few or no attempts to catch voles was seen during mid-day. In early morning and in the evenings, they started to get more active and with ever-lasting patience, their special hunting-technique often gave result. The food was always eaten directly after capture. 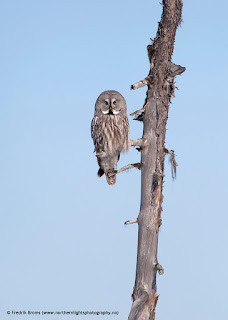 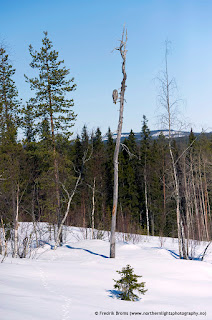 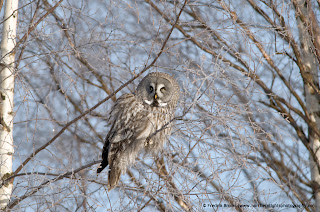 As the evening drew closer, the owls started to get more active and after much waiting suddenly an owl would take off after hearing something under the deep snow. After locating the sound of a vole under the snow-cover, she (or he) hit the snow with amazing precision using the long legs to get down to the vole - a hunting technique that will never stop fascinating me.

Seconds after taking off, the owl often hovered in the air for a fraction of a second for some final fine-tuning, and then dived towards the invisible target under the snow with determination. 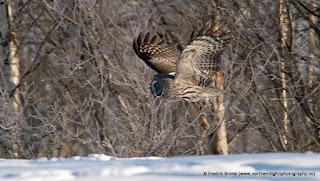 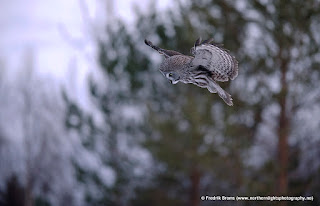 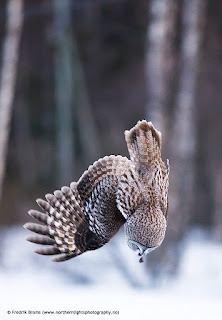 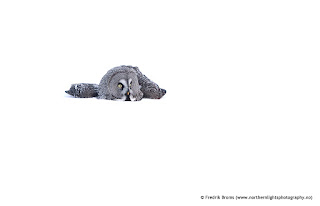 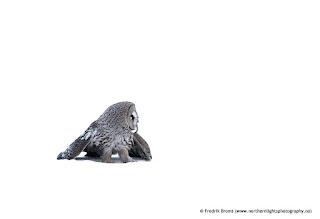 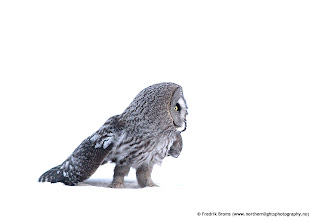 This time, the owl didn`t manage to catch anything and soon flew away again to start listening again. With the crust on top of the snow being hard, the hunting got more and more difficult and this is probably one of the reasons why so many great grey owls have been reported in areas far south of their "normal" range of distribution. 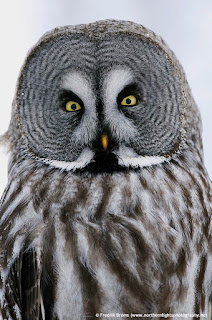 Off hunting in the evening...

Seeing a Snowy Owl (Bubo scandiacus) once in life is a dream for many people, and as a keen biologist, I have always shared that dream. When I moved to the high north of Scandinavia, I knew that I at least had the theoretical chance of seeing the species, but despite a historical good breeding year in 2011, I never managed to see the owl. (I do, however, have a pretty good overview of most of the white stones and owl-shaped lumps of snow in the surroundings... : - )

A fairly stationary young female owl in Lapland offered my first meeting with the great white owl, and even though I had hoped to discover one in the mountains close to where I live, I was not disappointed. What a beauty! 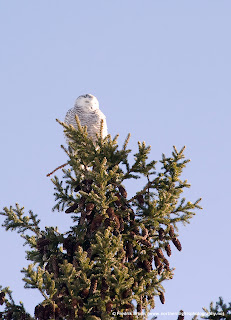 During the first day with the owl, she was sitting motionless during pretty much the entire day and showed no signs of hunting, neither in the morning, nor in the evening. The only activity was some occasional cleaning of her plumage or some yawning and stretching. Some locals that we met talked about seeing her feeding on a mountain hare (Lepus timidus) the day before, so maybe she was content and well-fed and was enjoying some rest in the sun. 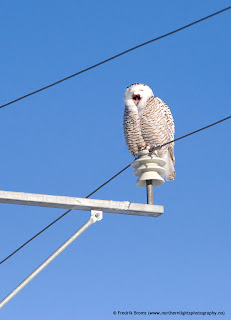 In the evening, the owl started to get more active. However, the weather during the last days (with really warm days and bitter cold nights), had created an almost impenetrable crust of ice (skare) on top of the snow, making it very difficult for the owl to reach through, and the first hunting attempt was unsuccessful. 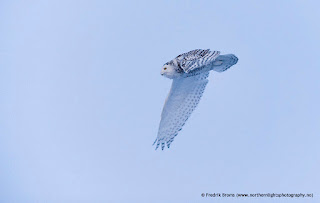 Stretching the wings in the evening light

In the afternoon of the second day, the owl successfully caught two voles, both within 40 minutes. With the hard snow cover, I was impressed by this, and it really made me wonder how on earth she could possibly locate and catch the food. Not until I started to look at the pictures during post-processing did I get a more clear idea of the special hunting strategy. The owl saw something I didn`t - which is hardly surprising, but it almost slipped my eyes even when I had it in front of me.

The first successful hunt I saw, happened at quite some distance and the sequence below is composed of 5 hand-held shots with a 300mm lens, showing the owl coming in from the right and chasing a vole that is running on top of the snow to the left, and finally grabbing it in the claws. Why did the vole go up on the snow in the first place? I thought that maybe they simply come up every now and then if the tunnels under the snow are not good enough, and didn`t think much more abount it.


In the sequence below, the reason why the vole had come up on the snow became evident (even though it is hard to see from the pictures taken at such big distance). The little pole/stick to the right in the photos (that I used to center the individual frames) suddenly dissapeared when I was centering the last frame, and that`s when I discovered that it was a weasel (Mustela nivalis) or a stoat/ermine (Mustela erminea).


Probably the weasel had been hunting the vole under the snow, and the vole, trying to escape, came up on the snow, only to find another predator - a hunting owl. Life is hard when you`re a vole! In the last shot of the sequence the weasel returns back in the tunnel under the snow.


The photo must be viewed in large size so see this - the photo below is a 3000x2345 pixels version. 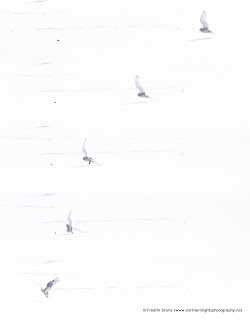 Snowy Owl hunting sequence:
A vole is being scared up to the surface of the snow by a weasel. The vole is then
elegantly caught by the owl while the weasel had to start hunting for another prey. 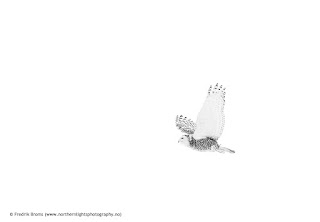 As the evening came once again, it was time to say goodbye to the owl, and after a day with much overcast weather, the clouds started to slowly drift apart and the waxing moon came out. As the moon shone over the snow-covered landscape, the owl was once again sitting in a nearby tree searching for any signs of food - a very difficult view to leave, but a meeting full of memories. 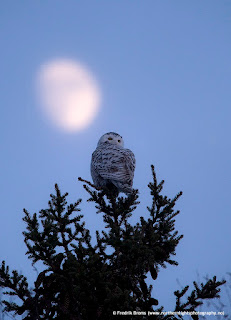 Among the various optical phenomena, the common rainbow is probably the most well known.

Less known, but occurring more frequently, are the various types of ice halos around the sun (or the moon), and now during late winter/early spring halos can be seen rather often (but take care not to look at the sun!).

The various shapes of ice crystals in the upper troposhere can produce many different types of ice halos including coloured or white arcs and spots and below is a picture of the most frequent ones, observed a couple of days ago. 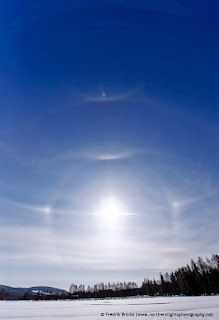 Several different types can be seen in the picture and below is the same version of the picture with labels of the names of the different halos. 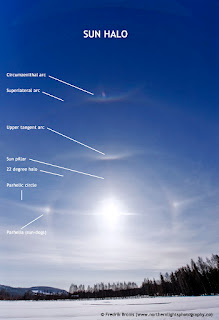 The nights above the Arctic circle are rapidly getting lighter and lighter, and soon only the very brightest stars can be seen.

There are, however, still some beautiful nights left and even some auroras have been visible lately, before the night-photography season is over for this time and the midnight sun period will take over.

Below is a photo of the Moon and Venus shining over a silent fjord in Northern Norway. Some rather dramatic clouds heralding a change in weather is adding that little extra bit of drama to the otherwise silent landscape. 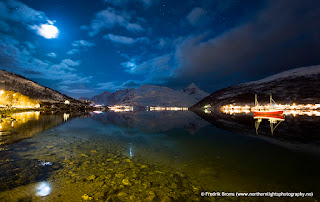