The Sperm Whale (Physeter macrocephalus) is the largest of all the toothed whales. It is also one of the most widely distributed marine mammals of the world. In Norwegian waters, sperm whales are encountered mainly during the summer months when males migrate north to feed on e.g. squid and fish. Females and young animals stay in lower latitudes and are not seen as far north as Norway.

Together with the bottlenose whale, the sperm whale is the deepest diving mammal in the world and may dive down to dephts as great as more than 2500m. Most dives are, however, more shallow and typically around 400 m. Being such deep divers, sperm whales are able to stay under water for the longest period of all marine mammals. Typical dives last 30-40 minutes, but they may stay under water for 1,5 hours, making the sperm whale an animal of extremes.

At sea, sperm whales are very easy to distinguish from all other whales. The blow, which is directed at an angle of 45 degrees to the left, in addition to the huge squarish head, the colouration and diving behaviour make sperm whales one of the easiest whales to identify in the field. 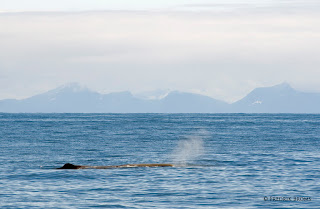 Sperm Whale off the coast of Andøya in Vesterålen 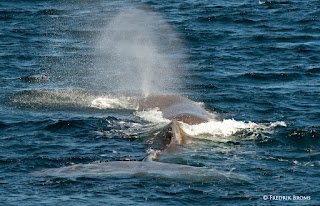 Normally sperm whales only show two thirds of their body above the surface, but this old male was
swimming with the fluke very close to the water surface giving a better idea of the look of the whale. 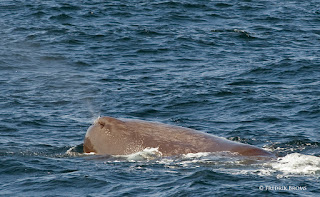 Just before a deep dive the whales show their large head 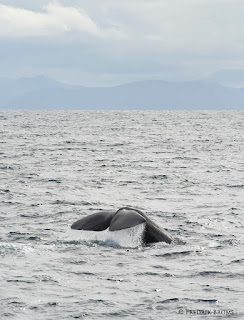 The Minke Whale (Balaenoptera acutorostrata) is one of the smallest baleen whales in the world. Only the poorly known Pygmy Right Whale is slightly smaller. Nonetheless, adult Minke whales grow up to 7-10 m long and may weigh 5-15 tonnes, and at a distance they may be confused with some of the larger baleen whales.

Minke whales usually show only very little of themselves at the surface and a small dorsal fin, who breaks the surface and rapidly disappear again, is usually all that it seen. They do not raise the fluke (tail fin) when they dive. Characteristic for the Minke whale is also that the blowholes and dorsal fin are often visible simultaneously, something that distinguish the Minke whale from all larger baleen whales (except the sei whale).

They are usually only seen briefly and when the sea is completely flat, and this was the case here in Vesterålen during the weekend. 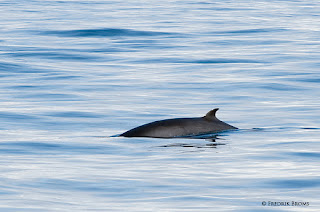 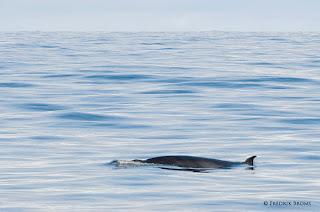 Yesterday, several pods of killer whales / orcas (Orcinus orca) were feeding on fish off the coast of Andøya in Vesterålen in Northern Norway. With rather strong wind and grey clouds hanging thick over the ocean, the experience itself was just like the killer whales - Majestetic and in Black and White. 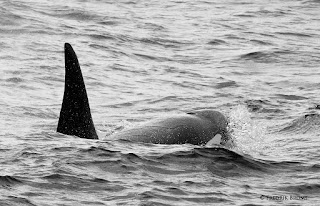 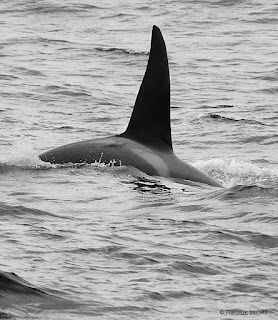 The huge dorsal fin of a large male 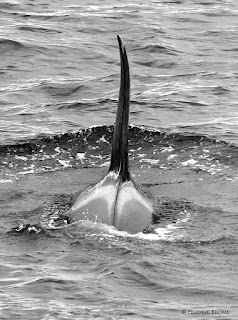 The dorsal fin of large males may reach 1,8 m 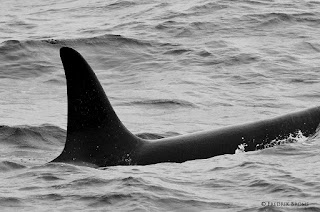 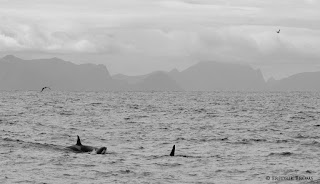 Killer whales (Orcinus orca), is one of the most characteristic and well-known of all marine mammals. They are found in most oceans of the world, and the distinct colouration in black and white, the large size and the fascinating and complex social structures and behaviour have made killer whales famous.

Killer whales may be found in Norwegian waters all year round. The world-famous whale watching sites in the deep fjords of Nordland county, where the wintering grounds of herring was largely restricted in the past, is however, no longer any guarantee for seeing killer whales as the migration routes of the herring has changed a lot during the last decade/s.

Right now, large schools of herring and mackerel can be seen outside the coast of Vesterålen, and with them, the killer whales have arrived. Below are some pictures from the whale watching company "Arctic Whale Tours" situated in Stø, Vesterålen, Norway taken off the coast of Andøya yesterday evening. A truely spectacular meeting with these fantastic animals! 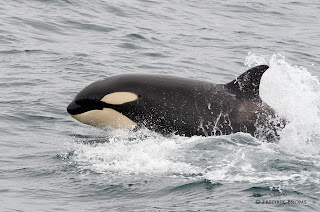 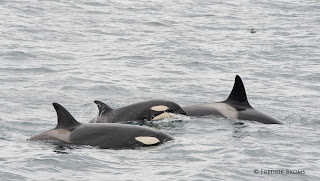 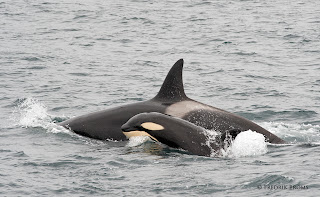 Female together with a young killer whale 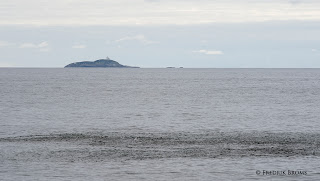 The Atlantic Puffin (Fratercula arctica) is a very popular species, both among nature photographers, bird-watchers, and other visitors to the areas where puffins may be seen. Right now, the breeding season is at its height along the Norwegian coast and around the breeding colonies, puffins can be seen flying back and forth with food to feed their chicks.

They nest in burrows on grassy cliffs and only spend time on land during the breeding season. The large and colourful beak is equipped with hooks, allowing the puffins to catch several fish in the beak before returning to land. On the pictures below it looks like most birds here in Vesterålen, Norway bring sand-eels and small herring back to feed their young. 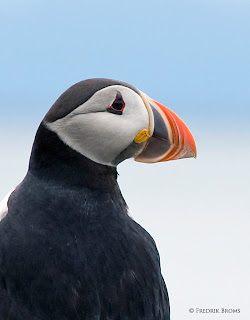 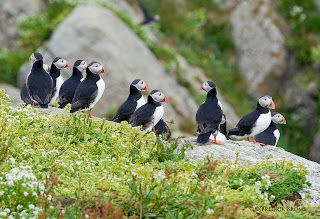 Puffins on their nesting grounds 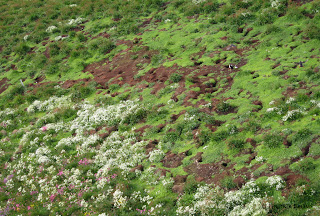 Puffin-burrows on a grassy cliff 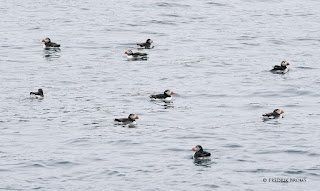 Puffins out at sea

Most of the puffins in Vesterålen seem to return from the sea with sand-eels or herring
Upplagd av Fredrik Broms kl. 07:34 5 kommentarer: